Ok, this new entry won't be very long.  But I just have to say... holy hell, Lucasfilm has been bought by Disney?  I can't decide if I should cheer, cry, or just... just... I don't know what.

Very little could be done in a new film that would be worse than Phantom Menace, I suppose.  But that still doesn't mean I am sanguine about seeing Lucasfilm get subsumed by the land of Donald Duck.  Unlike some of my friends, I am not a rabid Disneyana fan.  At the same time, I really WANT this to be great news, especially considering that a new Star Wars film is supposedly due out now in 2015 with others following a year or two behind.  That should be cause for rejoicing.

But with first the disappointments of the prequel trilogy, and now the Great Unknown of the whole kit and kaboodle being bought up by Someone Else... I just can't quite rejoice. Yet.

If this becomes a reason to be happy later, though, I will be VERY VERY happy to be... happy!

And that's about all I can say about that for the moment.

...in the thought that I'd be trying to use Live Journal some again.  But in spite of the fact that I have renewed, my photos area says I have not.  Hmmmm.

What I have learned:

1.  Cast it WITH the shaping wires in it already.  Do not add them later by hot-gluing them--things get too messy and bulky.
2.  Hair holder thingie needs to be less tall.
3.  Making a ponytail with a wig, even following wig-ponytail-making instructions, is damned freaking hard and involves way too much glue and still comes out sorta crappy... at least when I do it.
4.  Chin strap was way too long.  Size it down next time, now that you know the measurement.

However, all in all I am pretty pleased with it.  I am going to set the headdress aside for a bit and go to work on the neck and shoulder armor next so I don't just bog down on the one piece.  Gotta keep moving.  Hopefully since all but the redone chin-strap is already available in a negative mold for recasting, the second draft should be a lot faster and easier than the first.  Here are some pics... 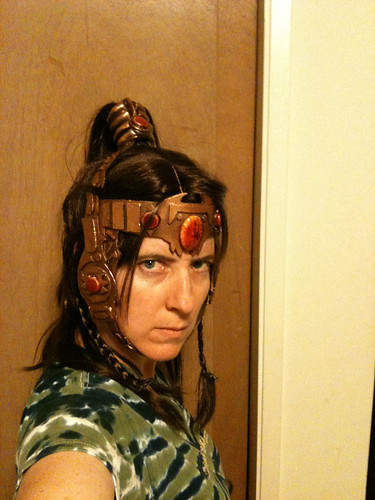 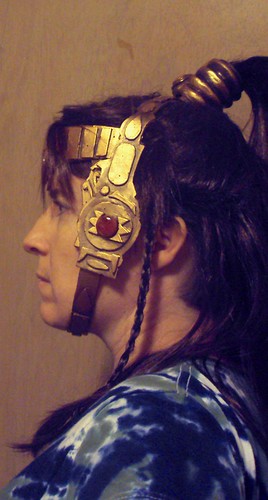 I think it is particularly nice worn along with a green tie-dye shirt... because nothing says "Sith" like tie-dye...er... not...

Finally, a craptastic merge of one of these photos with one of my old make-up test photos, to keep me on track for what (kinda sorta) the eventual effect should be... 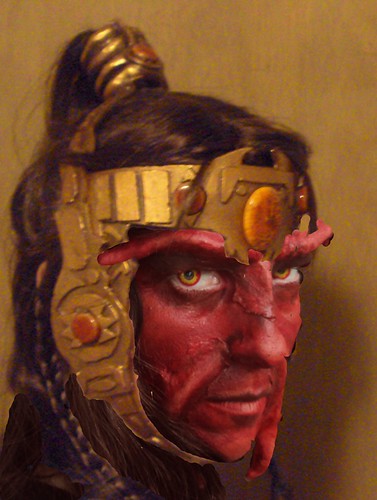 Moral - sandwiching two layers of Craft Foam together to double thickness of initial "sculpt" only works if you perfectly mate those two layers together. Duh. Now I know. Still, not altogether displeased. Filled up mold with hot glue--first attempt I left some bubbles and erratic edges. Second time I was very careful and had a better result. It hardens in a few minutes and is VERY flexible--so much so I might need to back it with wire.

I am now a fashion plate.

Anyway...gotta paint it and all that jazz but it seems to work on general principle at least...

...or a bubbly mess. Judging by the surface bubbles still rising after ten solid minutes of tapping the unset Silicone, I am guessing s bubbly mess. I will know in 8 hours or so. Learning curves...gotta love 'em... First silicone mold making attempt = fairly decisive failure. Fancy Silicone Platinum from Tap Plastics is too liquid for this project. Craft foam density is less than Silicone. Hence, it floats rather than sits at bottom of poured Silicone mixture. Not useful. Have flipped sculpt upside down to float on surface and attempt mold that way. Suspect not. I now have the holiest (in the sense of many holes, not in the sense of sacred) Silicone negative mold EVER. LOL! Apparently floating the craft foam original atop setting Silicone when it refuses to sink to the bottom and behave is NOT a useful alternative...particularly when you first tried to wipe the Silicone OFF the mold while still wet. Um. Yeah. Well, I didn't expect it to be usable. I just wanted to be sure that the Silicone WOULD set and did not interact oddly with craft foam for some reason. I may still use the hot glue to make a positive from it, just to use it for practice. It can be the Sith artifact that was chewed on by Pelko bugs while in storage at the bottom of a Temple basement.

Very happy with how the craft foam draft is going... we shall see... This is the forehead piece and the two cheek pieces.  The long strips going up will eventually attach to ring that puts the hair up in a sorta samurai-like tail.  There will also be a jaw strap.  But, wanted to try casting these two pieces first, making sure it'll work, and that the measurements are accurate (they seem to be) before moving on with the rest.  Aren't the stones and beads purty?  I think they'll look awesome in antique-bronze-gold "metal."

So, Pippa has been working on the Most Expensive Pet Ever award.  About a month ago, she came down with a UTI.  No big deal, right?  We take her to the vet, they take a urine sample--lots of little bacteria in there and blood in the urine.  They send it off to the lab to figure out just which bacteria they are.  In the meantime, she gets Baytril--a broad spectrum antibiotic.  And a pill popper.  Yay, pill popper!  She gets pill-popped for a week and her symptoms are steadily better.  Vet calls, says, "Oops, sample was not viable by the time it reached the lab--not sure what the bacteria was, but if the Baytril is working, then great!"  We say, "It's working!"  There was much rejoicing.

Next morning, Pippa goes into full-blown "OMG! I have a bladder infection!" mode--trying to pee every couple minutes and unable, frantically licking herself, et al.  Vet is called.  "Let's try Clavamox."

"Uh oh," says I.  This was the antibiotic that Pippa had gone ballistic over last time.  But we pick up the Clavamox and I remind myself, "It's ok, I have a pill popper now!"

HA!  Kitty develops several new pairs of jaws, at least six new limbs, and embeds herself in the ceiling whilst spewing about enough drool to fill Lake Tahoe's basin.  This continues for several days until she then begins vomiting all over the place.  She is taken off the Clavamox and we are told to buy Pepcid and give her a quarter pill until her tummy recovers.

HA!  Kitty goes even more insane when we try to give her that, and so we give up.  Kitty recovers on her own.  We are told to reduce her dosage to half a pill morning and night rather than a full.  We attempt.  Within a day--barf, barf, barf, barf.  We are told to take her off Clavamox and given a THIRD prescription to try, just in case the infection isn't deep-sixed by now.

Before we can even start, however, she has SOMETHING VERY WEIRD HAPPEN.  Out of the blue, she sits up from a nap on a chair, sways wildly, attempts to jump off the chair, and goes staggering and swaying about like Captain Jack Sparrow on a bender.  We panic, stuff her into her kitty carrier, and whisk her to the vet's.

Blood panels are normal.  Thyroid panel is normal.  All is normal.  By the time she is put on the exam table, she is steady as can be - if traumatized by being at the vet's yet again.  She goes home and we are told that hopefully it was a fluke, and if it's not, we will investigate further. Oh, and let's not bother with Antibiotic #3 unless she shows symptoms.  She doesn't.

Fast forward eight days -- this morning.  I am brushing my teeth, suddenly hear Pippa go, "MEOW MOW MOW!!!!!!" and then stampede up the hall.  This can sometimes be her invitation for me to chase her (she is an only kitty, so I am the only source of romping for her) but that's always at night.  So, this is odd.  I turn to look, and see her go SWAY STAGGER SWAY THUD! onto the floor of my bedroom.  She is up again immediately and has not blacked out, but now she's doing Captain Jack Sparrow again.  I steady her and she purrs... and within a minute or so she is steadier on her feet.  She goes staggering under her own power to her Source of All Comfort--her food dish--and eats.  Within another minute she is utterly back to normal.

...just before the rain. This weekend I have a semi-presentation to do that includes the concept of "taboo." No idea what I want to say. I am pondering. Yes, I had a long time to think about it and yes, I have delaaaaaayed. Taboo. That's the key word. Hmmm.

I have violated a few taboos in my time.

Gay marriage for many is a taboo.

Taboo comes from tabu, a word from Tonga.